On Friday after we had walked into Knaresborough along the Harrogate Ringway we got into the spirit of things with the Tour de Yorkshire due to roll through the town in the afternoon.  After fortifying ourselves with a Wetherspoons lunch……………well we did still have some vouchers to use up and they do have a sell by date (!)…………we bagged a spot to watch the tour.

We placed ourselves where we had a view of ‘the spotty house’ made famous by the Tour de Yorkshire in 2014.

The tour was a bit late due to a strong headwind and a crash near the start but we braved the freezing weather. 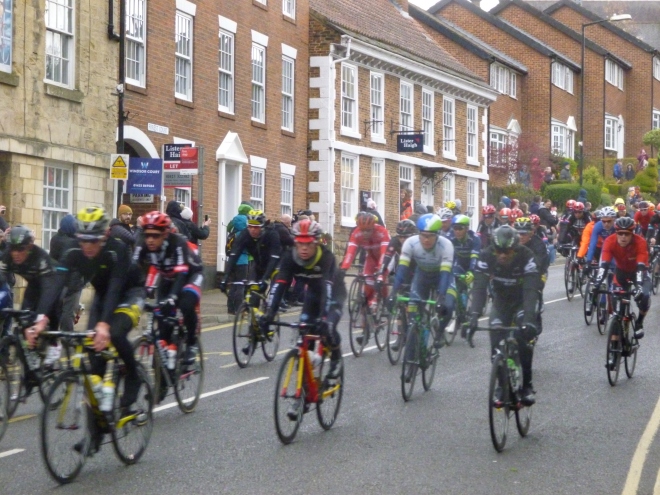 After it was all over (in about 2 minutes) we retired to Blind Jack’s pub which is my Dad’s favourite pub due to the brilliant range of real ales they sell.

It’s also Bertie’s (their Border Terrier) favourite pub as he always gets treats when he goes in there, as does every dog who visits.  Bertie has been known to make a beeline for the pub door even when the pub isn’t open!  The couple that own it have their own brewery which started off in an upstairs room of the pub.  They now have new premises after expansion and call themselves Bad Co and have won many awards for their beers.  If you’re in the area check them out.

We arrived at the station to see the back end of the train leaving the platform so we went back to Wetherspoons to kill an hour over a coffee.  Tim spent the time updating his numerous spreadsheets.  You’ve gotta love a spreadsheet!

Saturday dawned a beautiful sunny day so I suggested we go for a tootle on the bikes.  Our own Tour de Yorkshire so to speak. Unfortunately one mention of the ‘H’ word had  Tim rootling around in cupboards muttering things about needing to ‘sort things out’ and ‘a backlog of van work to do’. I took it that as the ride I’d planned was going to involve plenty of ‘hills’ he would prefer to stay back at base and well, do nothing.  In those situations it’s best just to leave him to it and go out on my own as I will feel guilty at every hill we encounter, like I’ve got a lead weight hovering behind me muttering expletives under it’s breath.

As it was, it was just as well I went on my own as my average speed over the 27 miles was about 8 miles an hour.  It was hill after hill after hill………….after hill.

Tomorrow we are leaving Yorkshire to head south to Great Yarmouth in Norfolk for another house sit.  Our charges for the next 2 weeks or so will be four wire fox terriers – Molly, Chester, Hattie and Daphne!  If you know what fox terriers are like we probably need our heads seeing to!