The Parque Natural de El Torcal, a huge expanse of limestone upland, lies about 10km south of Antequera and is famed for its rock sculptures.  The drive up there was as picturesque as can be with far reaching views across lush farmland and rocky peaks.  We passed several rural restaurants on the way up and, it being Fathers day in Spain, they were packed to the gunnels with Spanish families enjoying a leisurely lunch in the sunshine.  As we climbed the last 3km before reaching the visitor centre the sheer enormity of the rock formations suddenly hits you.  We’ve never seen anything like it on this scale before.

There are a couple of trails leading from the visitor centre and we opted for the 2hr one which winds its way up, over and around parts of the parque giving some excellent vantage points to view the limestone outcrops.  Once away from the visitor centre, and the shorter trail, which most people seemed to be following, it was eerily quiet.  It was quite hard going and not ideal if you have dodgy knees or hips but took us about 90 minutes with plenty of stops for photos.

Our Camper Connect App showed the car park to be an overnight stop but some of the reviews on it suggested that the Rangers had on occasions moved campers on.  We’d seen the ranger trawling about in a four wheel drive a few times and, as he hadn’t taken us to task by 7pm, we decided he probably wasn’t going to so we decided to stay the night.

Next morning we took another trail which took us about 3km down the hill to a lower car park giving us fabulous views across the valley, returning via the same way.

We dropped back down again to the free aire at Antequera for the night to plan our next stop, Granada.  Being a city stop, with no motorhome aires, we planned to stay at a campsite outside the city.  There are those certain times that we think it’s definitely worth paying for a campsite over finding somewhere to wild camp.  Big cities are those times as, after a day of sightseeing, it’s always nice to have a van to return to!  We stayed at Reina Isabel campsite, which is in the ACSI book, about 7km outside the city with a bus stop almost outside the door which takes 20 minutes to reach the city centre.  All for €1.50 each.  Bargain!

Our guide book says ‘if you see only one town in Spain, it should be Granada’.   My Dad also said ‘Jane, you must do Granada’.  It was inevitable, then, that we would end up there at some point on our journey!

Having not opted to do History even to GCSE level (or O levels as it was in my day) I’ll leave you to peruse Google if you want to know more about Granada’s history!   All I’ll say is it was first occupied by the Moors in the 8th Century, had a golden period under the Nasrid dynasty from 1238 to 1492, fell to the Catholic monarchs in 1492, had a period of decline in the 19th Century but much has been restored since then to its former glory.

The Alhambra, the Albaicín district and the Sacromonte district were the three main areas of Granada we wanted to see.  The guitarist Andrés Segovia described Granada as ‘a place of dreams, where the Lord put the seed of music in my soul’.  Travelling into Granada on the bus I was questioning that statement as it all looked a bit ordinary and, well, uninspiring really.

We picked up a map from the tourist information, got our bearings, and made our way to the Rio Darro which separates the Alhambra on one side of the hill with the Albaicín and Sacromonte areas on the other.  Strolling along the river on the Carrera del Darro, with views of the vast Alhambra on the hill to my right, the steep narrow streets of the Albaicín to my left and glimpses of the cave houses of Sacromonte’s gypsy area straight ahead I revised my initial thoughts.  Ordinary and uninspiring this was not!

Walking up the hill to the Sacromonte area we left all the people behind, which was great for us, but they were missing out as we thought it was a fascinating area and the views across to the Alhambra from several vantage points were superb.

This area was, in its heyday, Flamenco central where travellers would go to be wowed by impromptu performances.  Sadly though both our guide books warn that most of the flamenco shows put on today are of questionable quality.

The Albaicín, the former Moorish town, is full of narrow alleyways and small squares where we whiled away another hour or so before dropping down to the Cathedral.

Yes, we’d been seduced by Granada with its backdrop of the snow capped peaks of the Sierra Nevada and we were two happy bunnies on the return bus to the campsite.

After several aborted attempts on the Alhambra website a week ago where I could only go so far with the booking before the whole thing crashed we decided to wait until we got to Granada to buy tickets.

We’d asked in the tourist information about booking tickets but were told that they were sold out until May but if we queued up early in the morning at the entrance we MIGHT be able to get a ticket then as lots are returned!  What sort of time would be best I asked?  Oh, 6.30am if you want to be sure of the best chance of getting one was the reply!  Aaaarrrrggghhh!  Neither of us fancied doing that as it would mean cycling in as the first bus wasn’t until 7.00am and even if we did get a ticket we would have to wait another couple of hours before the Alhambra opened to get in.

The chap did say to ask at where we were staying as the hotels and guesthouses have a certain number of tickets.  When we got back we asked the friendly guy at reception about tickets and he said ‘sure, how does 11.00am suit you?’   It cost us a €2.50 each admin cost but it was a small price to pay for a stress free day! 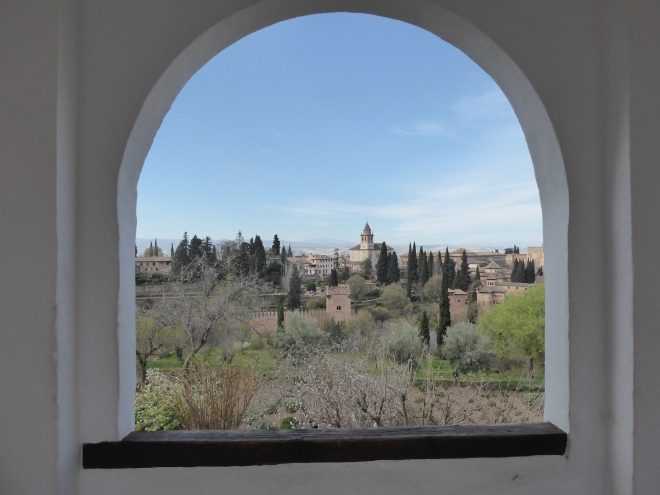 We had a brilliant day with cold but fine, clear sunny weather and we would absolutely recommend a visit. It is………….oh I can’t describe it.  Ok, I’ll describe it in one word………Sumptuous with a capital ‘S’.  You would have to go there yourself to get a true feel of it. 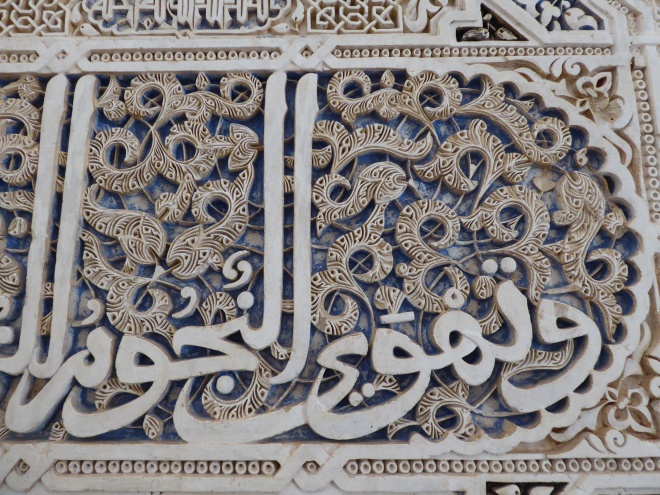 So, with the visit to Granada a resounding success we set off up the A395 to Pradollano, Europe’s most southerly ski resort in the Sierra Nevada.

We had intended to stay the night up there but, as it was freezing cold and with the weather closing in, we revised that idea and decided it was time to visit Las Alpujarras area south of Granada.