After a couple of nights in Orebić it was time to make our way along the Pelješac peninsula towards Dubrovnik.  What a glorious drive.  Well, it was for me being the passenger with my head swinging left and right totally spoilt for choice on spectacular views.  Tiny villages dot the hillsides and sheltered coves reveal themselves on the rugged coastline down below the main road.  There are a surprising number of vineyards along the sixty kilometre stretch between Orebić and Ston.  Considering the rocky landscape it’s amazing that it’s viable but I guess all that sunshine helps.  Apparently Croatia’s finest red wines come out of this area.  Olives also are in abundance as are oysters and mussels.  It’s a beautiful area that isn’t really developed at all.

We made a pit stop for a few hours at Ston.  Three kilometres of fourteenth century defensive stone walls, built by the Dubrovnik Republic to protect Ston’s saltpans from predators, climb up and over the hillside from Ston to Mali Ston.  They are quite a sight and the pictures don’t really do justice to how steep they are.

More spectacular scenery accompanied us on the remainder of the journey to Dubrovnik.  The coastal road hugs the steep hillside in lots of places giving cracking views across to several islands and down onto Dubrovnik itself.  There isn’t much choice for open campsites at this time of year near Dubrovnik with just a couple open.  We pitched up at Camping Matkovica which is about ten kilometres east of the city.  It is small which suits us and has a large Konzum supermarket across the road.  There are several bus options into Dubrovnik too.  It would have been nice to take a boat to Dubrovnik approaching the city walls of the old town from the water but they’d stopped for the season a few days before we got here so the bus it had to be.

Billed as the jewel in Croatia’s crown Dubrovnik is its most popular tourist destination. It is also doubles as ‘Kings Landing’ in the Games of Thrones series and has featured in Star Wars and Robin Hood.

It’s on the itinerary of many cruise ships so we steeled ourselves before going in for it to be heaving.  According to an article in the Telegraph newspaper earlier this year 529 cruise ships called in at Dubrovnik in 2016 bringing 799, 916 passengers with them.  It goes on to say that generally passengers have only three hours from docking to disembarkation which means the whole contents of the ship descend on the old town en masse.  UNESCO, concerned about the number of visitors, has warned that the City’s World Heritage status is at risk.  In response a plan to limit numbers visiting the old town to eight thousand has been implemented.  Don’t ask me how they count them though.

We arrived on the bus to see two enormous cruise ships parked up in the harbour.  Meh.  Thankfully though, once away from the Pile Gate and the Stradun (main street) it was very quiet.

By the time we arrived back in the Stradun after spending a couple of hours exploring the alleys and hidden away places that no-one else seemed to go to it had quietened down considerably and our fears of being crushed by the hordes had been unfounded. 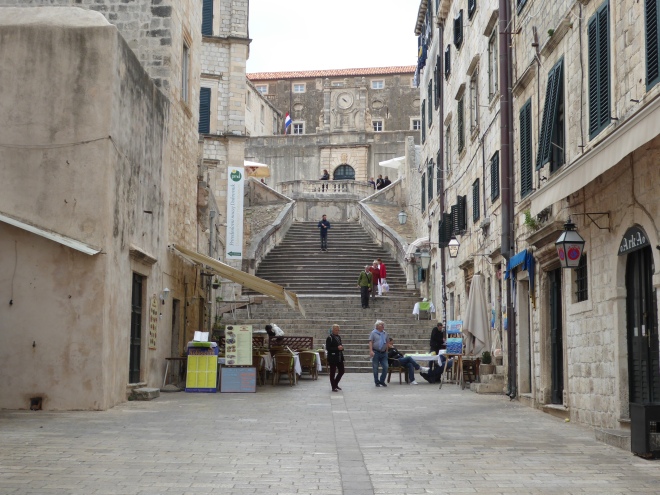 Meanwhile in other news Tim has been whiling away a bit of time with his magnet.  The latest spoils are pictured below.

I also have to fess up to having a little go myself.  It is quite addictive and I’m sure we will soon end up with ‘his’ and ‘hers’ magnet rigs before too long.

The locals are a bit bemused by it all though which is understandable but neither of us are cut out for ‘proper’ fishing.

So what’s next?  We’ve pretty much reached the end of the line here in Croatia with the border of Montenegro to the east and Serbia-Herzegovina to the north.  With no insurance for either of those countries we have two options. The first would be to retrace our wheels and head back up the Croatian coast but we don’t much fancy going back on ourselves.  The second is to catch a ferry from Dubrovnik sailing across the Adriatic to Bari on the coast of Italy.  Taking into account we’ll be looking for warmer climes throughout the winter months, we’ve booked the ferry across to Bari which leaves tonight.  Whoop!   In fact, I’m sitting at the ferry port now uploading this blog post.

This then gives us several options for the colder months.  The choices (all by ferry) are Greece, Sicily or Sardinia or a combination of two or three.  We think it is going to be Greece but, as always, we are keeping our options open and we’ll see how we feel when we get across to Italy.  I don’t think the ferries are going to be booked out at this time of year so there won’t be any need to book well in advance.