Well the Isle of Skye has certainly come up trumps with the weather.  Apart from one misty morning it has all been wall to wall sunshine.  So much so I’ve burnt the back of my knees. Doh!  The first thing that struck us when we arrived on Skye at the ferry port in Uig is that we weren’t going to have the island to ourselves.  I suppose that’s not surprising as it is said to be the most visited destination in Scotland.

We started our tour off on the Trotternish Peninsular north of Uig to do some walking in the Quiraing, an area famous for its rock pinnacles, sheer cliffs and rock formations.

What a great couple of days walking we had amongst the rocks then up onto the top with far reaching views across towards the mainland.

We saw several sightings of cuckoos perched on the rocks in those two days.  I tell you, from never having seen a cuckoo in the flesh before we have seen more than you can shake a stick at up here.

Further south towards Portree the Old Man of Storr, the most celebrated column of rock on the island, is a real draw for visitors.  We planned on an early shin up the hill and back before all the crowds arrived but with the clouds down over the hills that morning we didn’t see much.  The low cloud/mist did clear in and out but we didn’t think the Old Man was as spectacular as all the hype makes it out to be.

The views on the way back down under the cloud line were impressive though.

We’d started our walk at about  eight o’clock and it took about an hour and a half to get up there and back but by the time we got down the parking areas on both sides of the road were full and a steady stream of people were on their way up. It was time to move on!

We made a quick pit stop in Portree at the free long stay car park for a wander round the harbour area followed by the weekly shop at the Co-op there.

The Co-op seems to have a monopoly on the Outer Hebrides and Skye as there isn’t really any other choice other than a few tiny mini markets dotted about.  It’s a shame because we’ve lost the will to live in every single one of them.  It’s not what they stock that is lacking but the fact that there always seem to be member’s of staff replenishing the shelves in virtually every single aisle taking up nearly all the space with cages of new stock and empty packaging all over the place.  All their shops seem to have narrow aisles making it extremely tedious to get round other shoppers and staff.  I don’t blame the staff as they are only doing their job but why can’t they restock when the store is closed or not a peak times?  Why?!  Even Tim who is normally patience personified has succumbed to trolley rage almost dumping a half filled trolley in an aisle and stomping off back to the van.  He probably would have done if he could have found a space in an aisle to park it.  Anyway, rant over.  And relax!

With clear blue skies and temperatures in the low twenties it was a chance to cook outside again.

I grant you it’s not often you would see sausage curry on the menu of an Indian restaurant but in the absence of any other form of meat it had to do.  Try it, we recommend it!

We walked the four miles or so from our overnight stop across open moorland to Dunvegan Castle, the seat of the Clan Macleod since the thirteenth century but at £14 each to go in we gave it a miss and had coffee and cake at Jann’s Cakes in the village instead.

The following day we cycled to Claigan Coral Beaches just north of Dunvegan.  The sand is made up of calcified maerl (seaweed) and tiny sea shells.  Our guide book says that ‘on a sunny day the white sands and aqua water could almost be the Carribean’ but that description is probably stretching it a bit as there wasn’t much aqua water to be seen as it was full of seaweed.

It was a nice spot for lunch though.  I think we weren’t totally wowed by it after having experienced the beaches of the Outer Hebrides.

A big draw for walkers on Skye is the Cuillin mountain range which has over twenty Munros to be bagged.  The Munro baggers visiting Skye for the week must have been kicking their legs in the air on account of the clear blue sky weather we were having making for spectacular walking in the hills.  With not an OS map between us though we played it safe with a lovely circular walk around the coast of the Suisnish peninsular which gave us excellent views of the mountains in the distance. 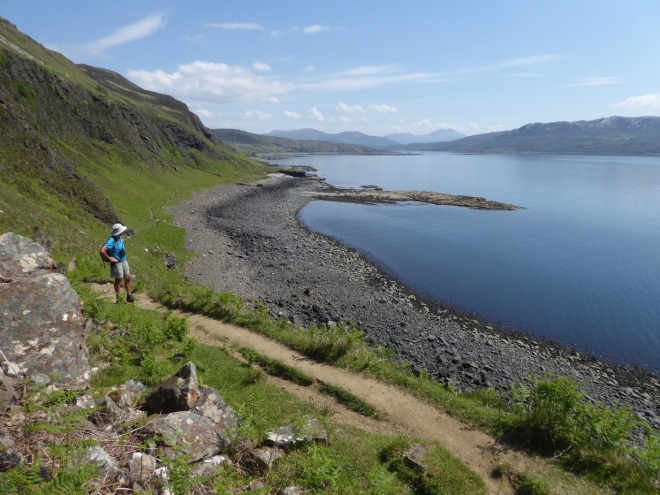 Our final night on Skye we parked up at Kyleakin with a view of the bridge.  Whilst having a cup of tea with our door open a van parked up next to us with New Zealand flags adorning one of the windows.  A young lad appeared at our door to introduce himself and we spent the next hour or so hearing all about his travels.  At ten years old he is far more well travelled than we are having visited nearly every country in Europe.  He and his parents are on the last few months of an eighteen month tour of Europe before shipping back their van, which they’d bought in the UK, to New Zealand.  Marvellous.

So that was Skye.  Again, we didn’t have time to see all that was to see but time is marching on and we need to get a move on.