The N13 out of Azrou takes you right down to the 150m high dunes of Erg Chebbi at Mezouga on the edge of the Sahara desert and close to the Algerian border.

It’s about 380km door to door and took us almost a week. It’s a good road and pretty quiet for the most part but there is a lot to waylay you en route.

We’re finding that anything between 80km to 120km driving per day, which generally takes between two and three hours, is enough anyway and there are campsites conveniently placed along the route.

Leaving Azrou the landscape becomes more arid and opens up into vast vistas of volcanic rock, palmeries and gorges.

The N13 goes right through the Ziz gorge with views of the High Atlas mountains in the distance. 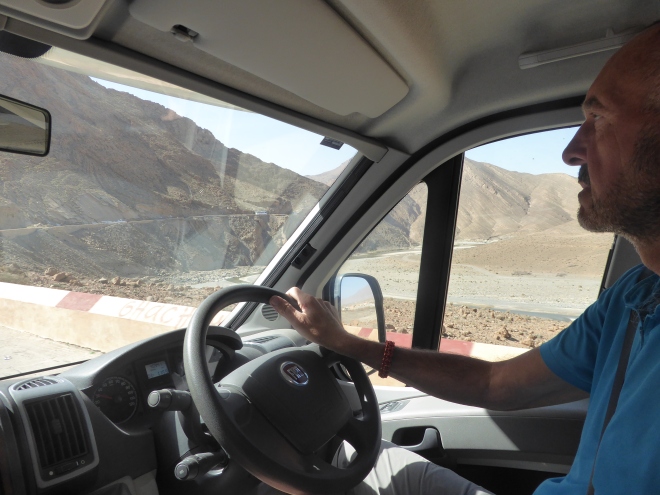 It’s not always easy to pull over to take pictures so some of these are taken whilst driving.

We did stop at a viewpoint above the Wadi Ziz but you do have to run the gauntlet of a smiling Berber appearing from thin air with a tray of fossils for your perusal.

I politely declined the first chaps wares but on the second viewpoint I came back to the van with a camel made out of the leaves of a palm tree (I think). To his credit Tim didn’t say a word but ‘the look’ said it all. Anyway, I quite like my camel but it has suffered in the heat of the last three days and looks like it has a broken neck.

We stopped for a night at Camping Jurassique just off the main road where our Swiss neighbours pointed out the footpath across the road which gets you to the top of the gorge.

If they hadn’t mentioned it we probably wouldn’t have realised it was there. It only took about an hour and the views from the top were magnificent.

Beyond the town of Er-Rachidia the landscape becomes greener and more lush with palmeries and small villages lining the valley flanked by the red volcanic rock of the gorge.

We’d intended just to stop for one night at Camping Hakkou a few kilometres from the small village of Aoufous but we had such a warm welcome from the Berber brothers that own it as well as all our French neighbours that we ended up staying three nights.  We were but the lone Brits amongst about a dozen French vans.

We took a stroll through the palmeries to the village to get some supplies from the souk which is open three days a week. As I mentioned in the last blog post we didn’t take any pictures this time.  It was just a small souk set right in the village. Again, all the sellers are grouped together by what they have on offer. Wandering down one alley we came across the row of butchers shops. You’ll definitely see things in technicolour here.  Throughout Europe we have seen different types of meats, some with the recognisable parts of the animal still attached. Rabbits and game birds in France. Whole suckling pig in Portugal and Spain. Whole pig’s trotters in Germany. A horse’s head (no fur or eyes) in a market in Athens. I’ve been slowly acclimatised to seeing things that you wouldn’t see at the local butchers or supermarket in the UK. I wasn’t particularly fazed then when we went past one butcher with a cow hanging up outside. It had been skinned but the hide was on the pavement in front of the shop. Alongside the hide the complete head (fur and eyes still in situ) sat upside down with the tongue hanging out.  If you wanted some shin of beef the hoofs and fur presumably come with it as four upright legs were neatly arranged beside the upside down head. The me of three years ago would have been a tad freaked out by such a sight but I’ve had to ‘man-up’ (woman-up?) a bit throughout our travels. I’m not sure what you would do with a whole head of cow as I don’t ever recall seeing a recipe which involves one. I must google it.

We got back to the campsite just at the right time as the owner had invited the whole campsite to share a meal at his parents house in the village. One of the French ladies explained to me that it was the seventh day of mourning after the death of a family member. On the seventh day family and friends are invited to share a meal.  At least I think that was what was happening. My French wasn’t sufficient to process everything that she said to me.

Anyway, it was a privilege to be invited and really gave us an insight into Berber family life. The houses in the village generally have tiny windows covered with iron shutters and are surrounded by high walls as protection from the heat so you never really get an idea of what is beyond. We were shown through a spotless, attractive, light and airy courtyard before all settling down on cushions lining the walls of a large room with one high window. We hadn’t taken a camera as we hadn’t envisaged being able to take photos but the brothers were happy for pictures to be taken inside the room where we were eating. We just had Tims phone so the photos aren’t great.

Tea was served by Ahmed and his wife and his children came to greet everyone. It was a long drawn out affair with I think six rounds of tea. Big rocks of sugar go into each pot so four glasses were enough for me.

The food was served on low tables with about eight people sharing one dish. Mutton and couscous were followed by roast chicken served with bread and then oranges and bananas for desert.

We weren’t sure what was going on outside as we weren’t invited to that part but there was a lot of singing by the ladies and when we left there must have been thirty or more ladies sitting in the courtyard area.

When we left I tried to say to Ahmed, in my abysmal French, that we had probably received a warmer welcome to Morocco than Prince Harry and Meghan had but I think it got lost in translation!  We thoroughly enjoyed our extraordinary afternoon and it was another unplanned and unexpected event to add to our ever growing list of highlights of our trip.

After three nights it was time to move on to the desert.  After a quick shin up to the top of the gorge outside the campsite to admire the view we said goodbye to our very warm and generous hosts and our French neighbours and headed down to the Mizouga.

4 thoughts on “Through the Ziz Gorge to the desert…. .”