The drive across the wide open arid plains from Merzouga towards Zagora and beyond to Ouarzazate was very relaxed.

Granted, I’m not the one that did the drive but with little traffic on the road and just a few small towns to negotiate it seemed alright to me!

We were waylaid on the way to Zagora for a couple of nights at Camping Serdra which is found after a six kilometre drive along a very good track off the main N12.

Apart from a small village nearby the nearest town was sixteen kilometres away.  Considering it is in the middle of nowhere it’s a really popular site particularly with some of the French that tow quad bikes or dune buggies behind their vans.  I can see why as the site is pristine (for Morocco), tea is served on arrival, it has two washing machines, unlimited hot water and the facilities block is spotless.

We weren’t complaining but I still find it a little unsettling to plug in, quaff tea, put a load of washing on and soak up the sun after having driven past ladies walking along the edge of the roadside carrying heavy loads of some sort of plant on their backs, some of whom waved at us to stop indicating that they wanted some food.  Likewise as we drove along the piste to and from the campsite children came running alongside waving wanting us to stop to give them something.  Even though we’ve bought things that perhaps we don’t really need from sellers along the road we haven’t given anything to anyone who has been begging.  It is difficult to know what is the best thing to do but if all the vans stopped outside the campsite to give something to the children would they then skip school to spend their days lining the road to the campsite?

Whilst at Camping Serdrar we didn’t do much of anything but we did take a walk up to the top of one of the nearby hills just to soak up the vastness of it all and were rewarded by seeing a bit of wildlife.

The view from the top of Jbel Zagora.

The road from Zagora to Ouzazate takes you right through the Drâa valley and up and over the Tizi-n-Tiniffift pass (1,660m) from where you get a first glimpse of the foothills of the High Atlas mountains in the distance.

We stopped for the night at Agdz to break up the drive from Zagora to Ouazazate, a busy bustling little town full of life. 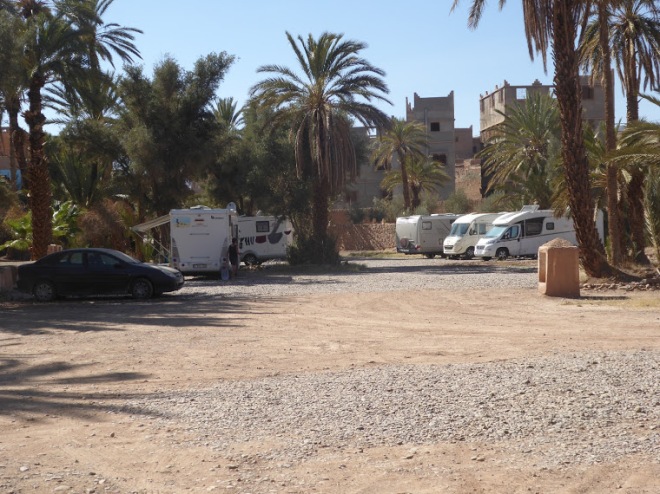 In Ouzazate we bought another carpet!  I hadn’t intended on buying anything but we were invited in for a look.  The trouble is I really like the stuff that is sold here and we had been toying with replacing the fitted carpets in the van.  We’re onto our second set now and they need replacing again.  Some people would question why we even have carpets in the van in such a small space but, for me, it’s non negotiable.  I like a bit of carpet underfoot.  We had talked about trying to get some made up whilst we are here but why would I want beige acrylic carpets again when I can have some mats made out of camel wool which are much more attractive, can be washed and are easier to fling out of the van when it needs a sweep out?  So anyway we started in on the negotiations for a small carpet.  The seller said that as he liked us he would give us ‘a brother price’.  Mmm Hmm.  Ok.  1300 dirham was his opening gambit.  Way too much for us.  I made a cheeky offer of 300.  After much sucking of teeth and discussions about the fact we didn’t really need the carpet and blah blah blah he eventually came down to 600.

I offered 350 and apologised saying we were just too far apart to come to an agreed price and made for the door.  I really believed I’d offered a price below one that he could make a profit on but no sooner than you could say Inshallah the carpet was in a bag and thrust under Tims arm. So much for ‘a brother price’ then!  Yes it’s beige but I have pushed the boat out this time as it does have a bit of colour in it.

Not far from the campsite in Ouzazate we spotted a little shack with smoke billowing out the roof and a queue of two or three people outside.  Three ladies were inside.  One was making dough and moulding it into flatbread, one was stoking a homemade bread oven in the corner and the third was sorting out the bread as it came out.  At three dirham each it was the best bread we’ve had since we’ve been here and made an excellent base for a pizza.

It was just too hot in Ouzazate to stay more than one night (I know it’s a hard life) so we moved on up towards the Dadès gorge to cool off for a bit.

6 thoughts on “Onwards to Zagora and through the Drâa valley to Ouarzazate…. .”

You Only Die Once But You Live Everyday