The first one hundred kilometres of the R105 from Tafraoute back to the coast at Agadir was pretty jaw dropping.

Once down onto the flatter plains nearer to the coast the traffic and chaos built up again.

The novelty of Agadir drew us in as did the promise of the sale of beer at a supermarket just off the ring road.  Alcohol was indeed on sale in a separate room at the side of the supermarket behind an iron shutter with a gold curtain pulled across it.  If Tim had a tail to wag it would have been wagging.

The campsite at Agadir didn’t disappoint and has definitely earned its many one and two star reviews.  We had been warned so we weren’t complaining.

It’s a municipal campsite just a short walk from the seafront and next door to some newish holiday apartments so I’m guessing it’s just not being maintained as it will eventually be sold off for a new holiday complex.  It felt safe though and was fine for a night.

Although the beach front didn’t really feel like the same Morocco we’ve been seeing it also didn’t feel like being in Europe either as there aren’t any really high rise buildings. The highest reach maybe four or five floors.

We had a very enjoyable stroll along the length of the seafront and back before heading further up the coast. 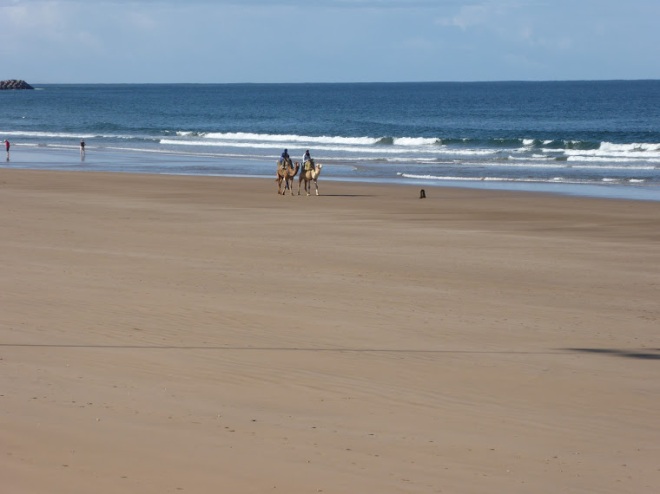 It’s really not developed at all in between Agadir and Essaouira and was a pleasant drive.

As there isn’t a campsite at Essaouira we stopped twenty kilometres short at Sidi Kaouki, a low key surfy type of place.

We spent a couple of days relaxing there before taking the bus into Essaouira.

As the ‘regular’ bus failed to show up we decided to take the mini bus instead.  We’ve seen these old mini buses all over Morocco but it was our first time using one.  Once we were on the driver shouted at someone to get out of his seat to let me sit down.  His needs looked greater than mine though so I indicated that I was happy to stand.  You have to shut your eyes to any aspects of health and safety in Morocco and the mini bus is no different.  By the time we’d picked up people on the way I’d counted twenty eight people on the bus.  If you counted children on laps and on the floor squeezed between seats it was probably more.

A conductor operates the sliding door and takes your fare.  Ten dirhams each (80p).  Frequently the sliding door is left open to let a little air in.  Once the mini bus gets busier the conductor will indicate where he wants someone to stand.  Luggage is put under seats or on laps to make the best use of the available space.  There are no bus stops.  The driver just beeps his horn to let people know he’s coming to give them a chance to indicate whether or not they want to get on.  It’s not much different to getting on the tube in London at rush hour.

Essaouira is touristy but fab.  It’s an eighteenth century military port that has a shabby chic charm about it. 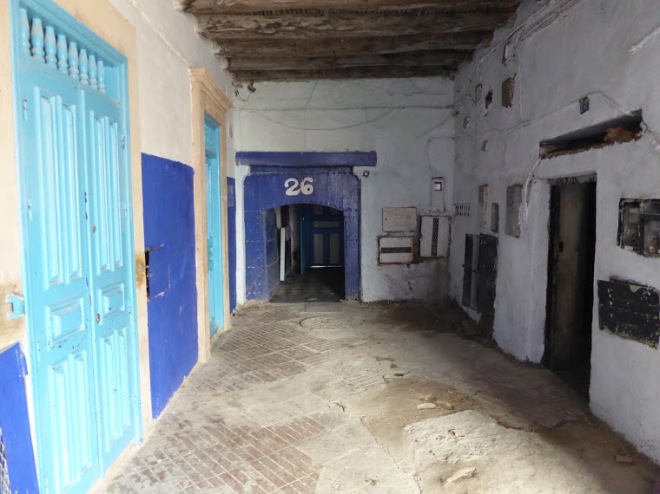 It has everything to make a good day out.  A bustling medina, ramparts, a long sandy beach and a fishing port.

As nothing really gets going in Morroco before the afternoon the medina was a pleasure to stroll around without any hassle except for the occasional ‘come look inside’. 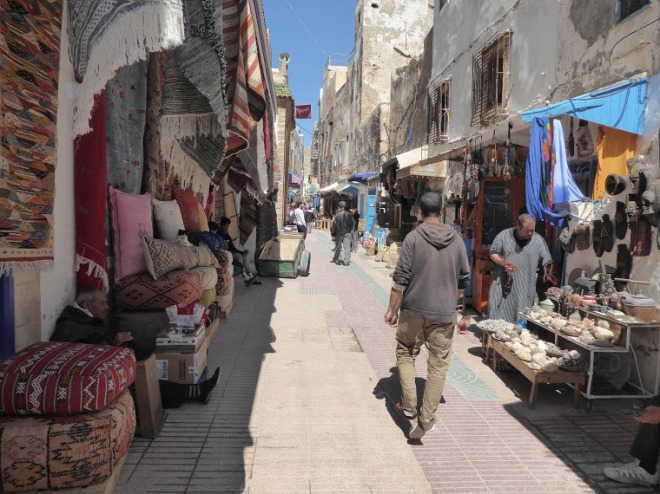 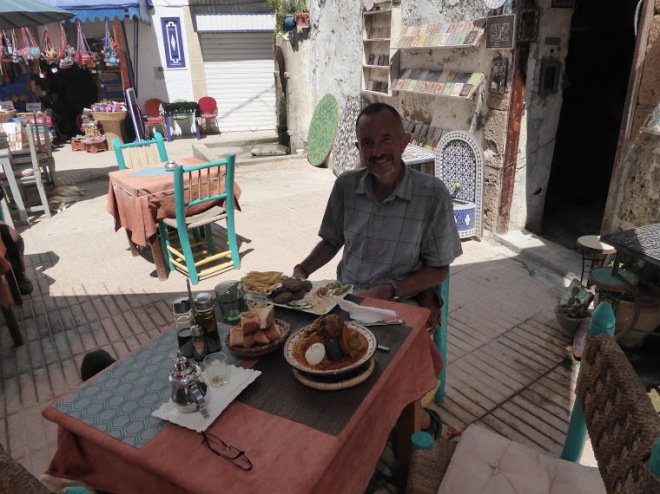 After lunch we mooched down to the fishing port.  It was without doubt the most interesting fishing port we have seen so far.  It’s also pongy, noisy and crowded. 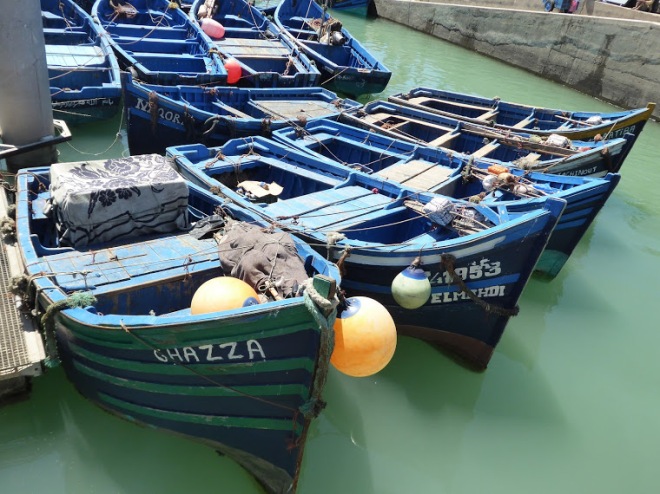 From the 18th century forty percent of Atlantic sea traffic passed through Essaouira.  It was once one of Morocco’s largest sardine ports. 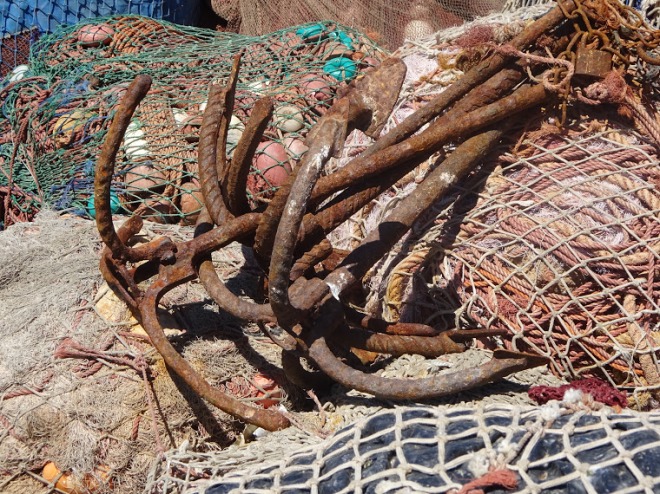 We watched in morbid fascination as four sharks were manhandled out of one of the little fishing boats and onto a handcart.

It took four men to lift each one.  The only time I’ve seen anything quite like it is on an episode of Extreme Fishing with Robson Green.

Further along the quay a trawler was being unloaded.  A lorry full of ice had just arrived and been dumped onto the quayside. 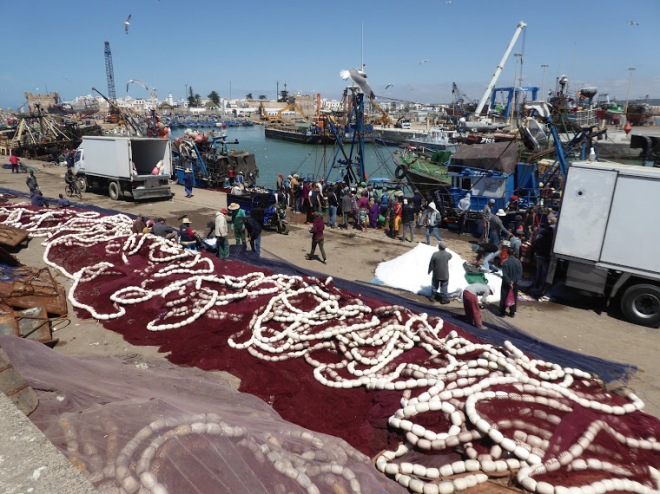 We’ve never seen such a hive of activity on a fishing boat before.  Normally you’d see maybe up to three men unloading fish that has already been kept frozen on board.  Here there were up to twenty men on the boat loading trays and dozens more on the quayside.

Barbecues were on the go grilling, nets were being repaired, seagulls were swarming, cats, cats and more cats were everywhere.

So did we buy anything?

No, we’d don’t really do fish!

We saw the number two bus back to Sidi Kaouki idling just outside the medina walls so made a mad dash to get on it.  Standing room only.  As it turned out there was no rush.  The bus driver was nowhere to be seen.  Half an hour we waited before the bus left.  Gradually every spare space was filled with people and luggage.  One rotund lady decided she wanted to be in the middle of the bus next to a friend so shoved everyone out of the way in her attempt to get there.  Then she decided she needed some more shopping so elbowed her way off again.  Armed with milk and orange juice she jabbed her way to the middle again.  Three times she got off and back on again in that half hour.  Finally she settled in for the journey by budging up a lady sitting in a seat with her two children.  I’ve got to give it to her she was a lady who knew exactly what she wanted and managed to get at least a cheek on the seat.  I’m sure it wouldn’t have been so comical if we had to do the journey every day.  At seven dirhams each (56p) it was as cheap as chips.  It took over an hour though as it makes detours to the airport and other little villages.

Tim did enjoy some of his beer stash at the end of it.

You Only Die Once But You Live Everyday