Nine weeks ago we would never have even considered driving into central Marrakech to spend a couple of nights at a guarded car park just outside the medina walls.  When I suggested it to Tim I never expected him to shrug and say ‘yep, no problem’.  All the campsites are between ten and fifteen kilometres outside the city and, unless we wanted to do a bit of a dog leg, we would have had to drive almost into the city anyway.  The closest guarded parking is within spitting distance of the Katoubia Mosque and just a five or ten minute walk to the famous Place Jemaa el-Fna.  The drawback is that it’s busy with cars coming and going every hour of the day.  The park4night app indicated another car parking area just a little further away just outside the city walls which looked and sounded less busy.  We got there without incident.  The traffic builds up at around the six kilometre mark outside the city but wasn’t as horrendous as we’d imagined.

It was about midday so not the busiest time of day but it is a bit of a free for all especially at traffic lights where petit taxis will creep up the inside in the cycle lane to get to the front of the queue.  Oh, and there’ll be scooters, mopeds and bikes galore filling up any spare gap to be filled.  We had two incidents of a moped pulling alongside at the traffic lights with the rider trying to engage Tim in a bit of chit chat.  We knew they were trying to get us to follow them to a campsite and charge us for their services as we’d read about such events on the Ourtour blog.  It happened on our way out of Fèz too.  After being ignored for a few minutes they turned around and rode off into the oncoming traffic.

Once at the parking we paid our fifty dirhams a night (£4.00) and settled in on the tarmac.  There was plenty of space so we didn’t have cars coming and going past us all day.

It goes without saying it was noisy as it’s adjacent to four lanes of traffic but it was a five minute walk to a Carrefour supermarket and still only a fifteen minute walk to where the action is. Perfect for a night or two.

Our plans for Marrakech were just to wander aimlessly.  In other words we had no plans for Marrakech.  We weren’t in the market for buying any more carpets and had no plans to start in on any negotiating for pottery, jewellery, ornaments, metalwork, leather, basketry, fabric, drums, clothing, spices or anything else that Marrakech is famous for.  No, we were all shopped out after our last lengthy carpet negotiations.

The question is how do you manage not to buy anything in a city like Marrakech where you have to weave your way past the most tenacious sellers in the world?  I took the lead from Tim.  Ignore everyone.  It may not be the politest way to go about things but it does work.  Tim is a past master at it.  He finds it much easier than I do as I at least like to smile and say no thank you.

Walking around the souks before midday also helps as it takes a while for Morocco to wake up in the mornings and most sellers look a bit dazed before eleven o’clock. 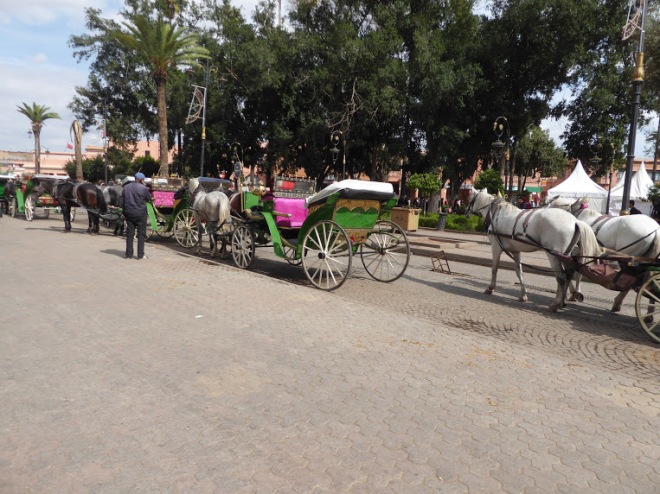 Place Jemaa el-Fna, a large open area, is the nerve centre of Marrakech and has been declared a World Heritage Site by UNESCO.  The different souks radiate north and east from it.  Our guide book describes how, up to the 19th Century, criminals on death row, were beheaded, their heads pickled and suspended from the city gates.   Sometimes up to as many as forty five per day.  Now the area serves as a market in the mornings selling plants, nuts, confectionary and freshly squeezed fruits.  From late afternoon things change.  Street food stalls are quickly set up with their charcoal grills of billowing smoke.

There’ll be snake charmers, monkey tamers, musicians, story tellers drawing in the crowds.  We had a wander around in the early evening on our first day in Marrakech.  Call me a party pooper but I really didn’t like it.  Chained monkeys performing for photographs, snakes being manhandled here there and everywhere, a few caged reptiles for sale, henna tattooists touting for business, smoke, fumes from mopeds, noise and crowds of people.

We had planned before our visit to have a meal or coffee on one of the cafe roof terraces above the square so we could have an unencumbered eyeball at all that was going on but in the end we really didn’t fancy it.

The following morning we had a very relaxed few hours wandering round all the different souks without any hassle. 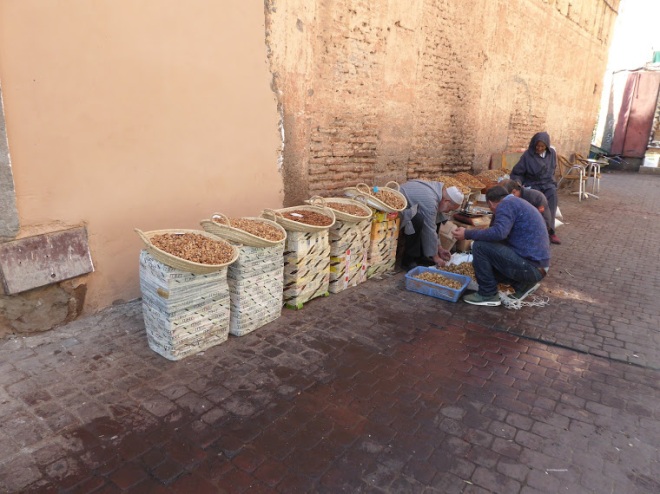 It’s not easy to find your way in any of the souks and we did find ourselves in residential areas or at dead ends quite a few times. 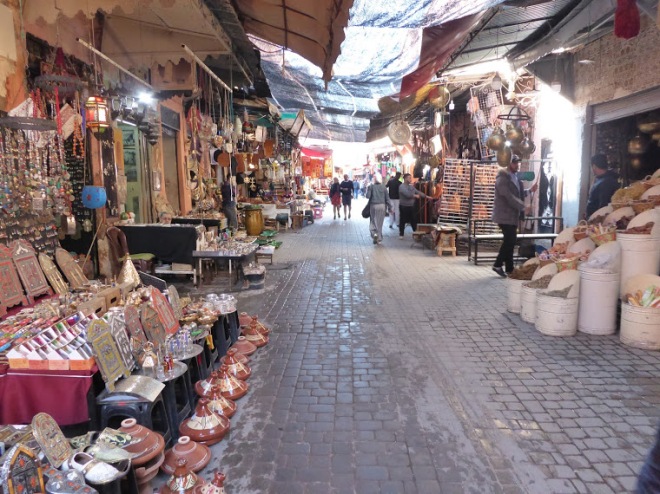 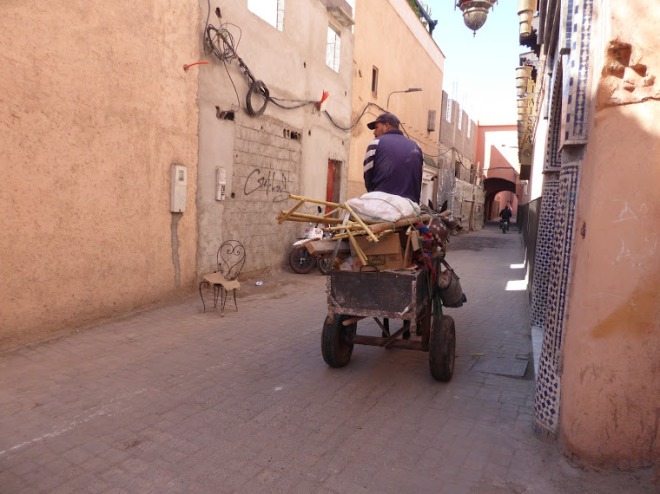 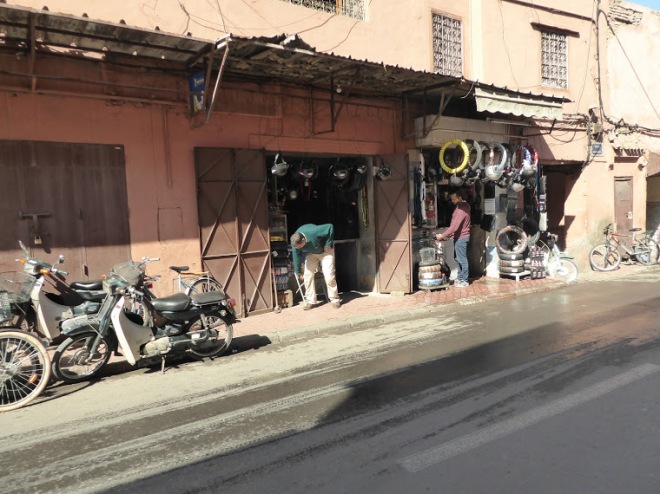 We probably missed some of the souks as I don’t remember seeing basketry, wool or silk but it didn’t matter as there are plenty of other things to be distracted by. 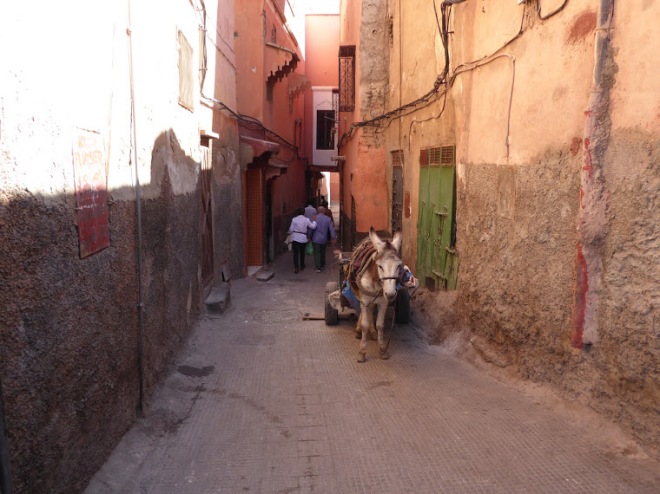 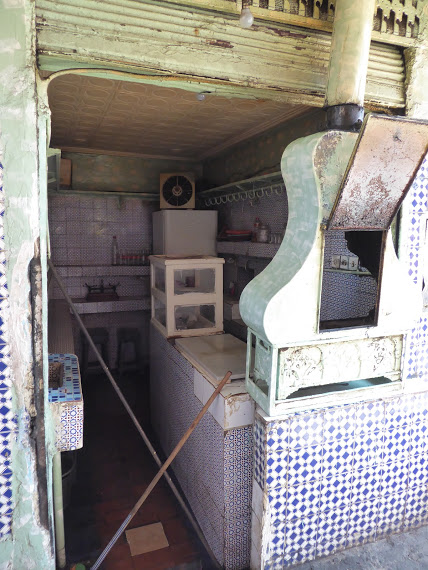 The most interesting for us is always the metalworking souks where blacksmiths work standing in a hole up to their thighs whilst doing something or other with metal in a furnace alongside.  Everything spills out onto the street and iron is bashed and hammered into shape or welded with all the sparks flying over everyone going past. 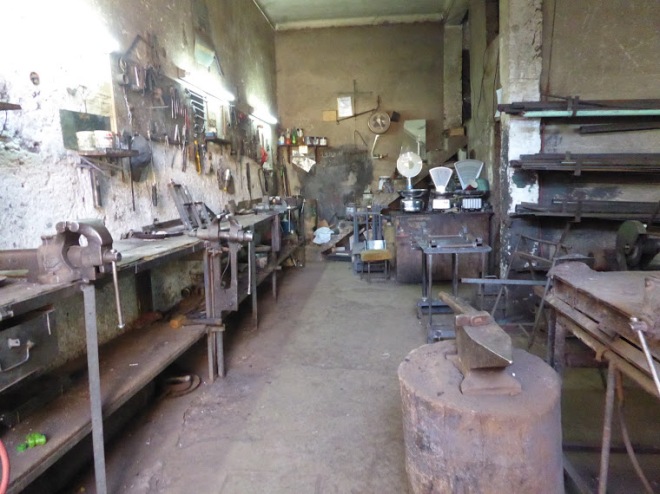 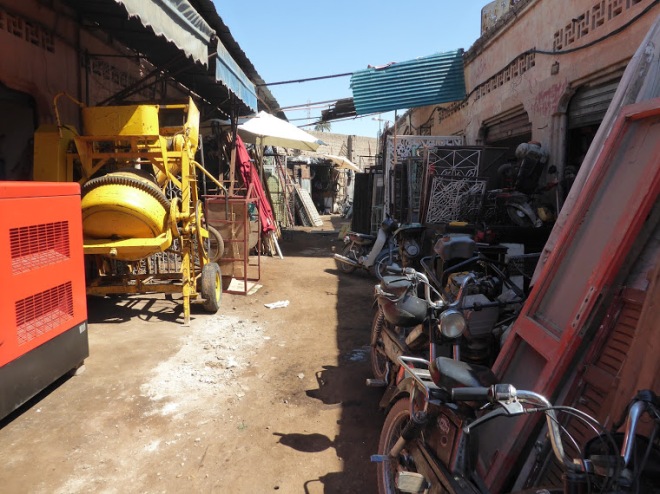 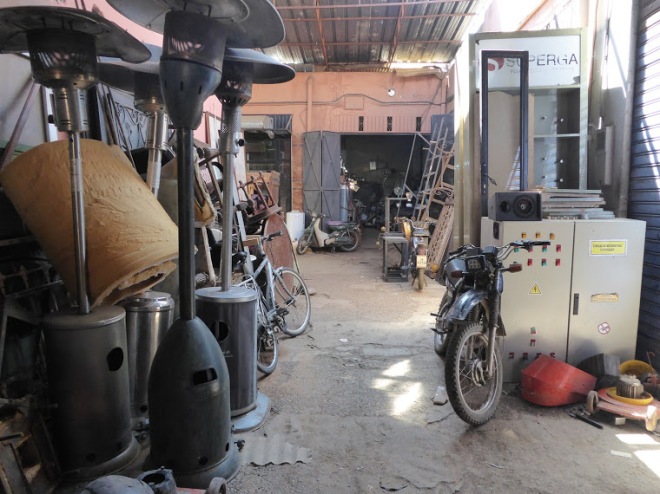 Even though Marrakech is a bit mad and crowded we didn’t feel at all unsafe though. When we got lost people pointed us in the right direction and we didn’t pick up any extra baggage in the form of someone trying to take us on a tour.  We received far less attention than we’d imagined. 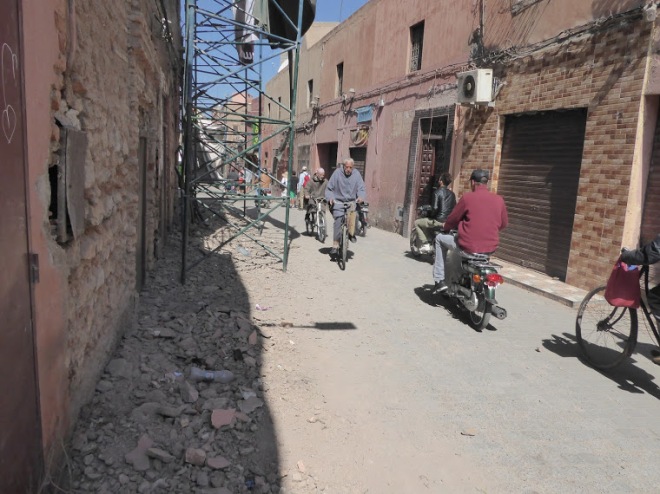 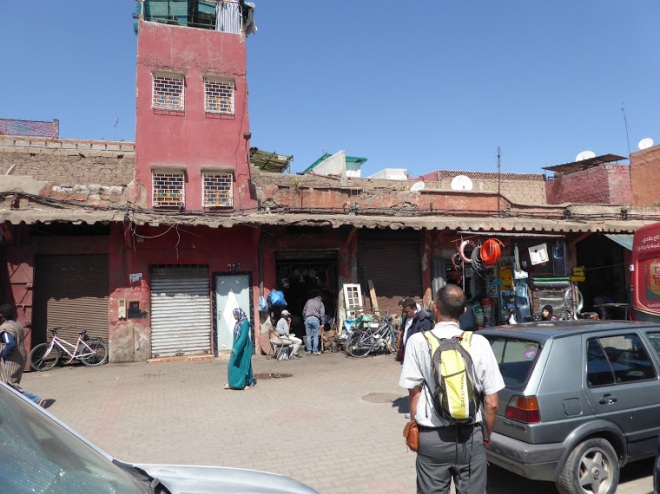 By the time we got back to the van we felt like we had lungs full of lead though as the mopeds, motorbikes and scooters still drive right through the narrow alleyways of the souks.  The covered souks were the worst and full of fumes.  It all adds to the experience and as a one-off visit its ok but I’m grateful I don’t have to work day in and day out in those conditions. 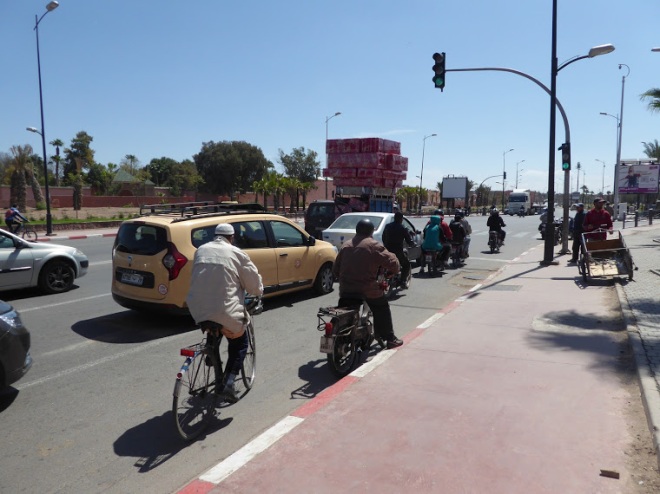 We found the souks of Fès much more fascinating as they had a real medieval feel and we felt like we’d stepped back in time.  Any form of motorised traffic is banned in the main souks of Fès so it’s much better for the lungs as well.

There’s much more to see in Marrakech but after an evening and a day we were happy to escape back to calmer places.  All in all doing Marrakech is a right of passage on any visit to Morocco but I can’t say we would be rushing back.

The Cascades d’Ouzoud a one hundred and fifty kilometre drive east beckoned.

One thought on “Marrakech…. .”